As an industrial design student in Genk, Raf Simons was intrigued by the Antwerp Six and decided to apprentice with Walter Van Beirendonck. Linda Loppa, then head of the Antwerp fashion academy, encouraged him to make the leap into fashion without having studied fashion. Simons launched his own label in 1995, and his first show in Paris followed in 1997. His narrow silhouettes in classic fabrics and his combination of traditional tailoring elements with references to diverse youth cultures and music sparked radical innovation in men’s fashion. From 2005, he has also designed for women, first as creative director for Jil Sander and for Dior from 2012 to 2015. Following a brief intermezzo with the American Calvin Klein label, in 2020 he became one of the creative co-directors for Prada, at Miuccia Prada’s side, in a unique collaboration that further confirms Simons’s long-lasting influence on the world of fashion.

Raf Simons sees clothing as a medium for creating dialogue and for visualizing an attitude. His models, whom he initially sought out himself in the streets of Antwerp, strengthen his revolutionary aesthetic. Video also has an important role in the presentation of his work. In the lookbook for his Woe Onto Those Who Spit on the Fear Generation… The Wind Will Blow It Back collection, for example, he used stills from a video created by Willy Vanderperre.

The 2014-15 Autumn-Winter collection was the result of years of exchange between Raf Simons and Sterling Ruby. The artist created sculptures from textiles which encircled the catwalk, while the collection revealed their shared visual language through the use of photo collages, words and a punk DIY aesthetic with outfits spattered with paint.

From 2001, Raf Simons regularly worked with visual artist Peter de Potter, who creates poetic slogans. ‘Kollaps’ refers to the title of the first album by the German band, Einstürzende Neubauten. In retrospect, it almost seems as if the collection anticipated the 9/11 terrorist attacks, which took place a few months after the show.

The 2017 Spring-Summer collection is an homage to the American photographer Robert Mapplethorpe (1946-1989). Mapplethorpe’s black-and-white portraits of artists, musicians and porn stars captured the New York cultural scene during the 1970s and 1980s. In collaboration with the Robert Mapplethorpe Foundation, Raf Simons selected over 100 photographs from the foundation’s archives. His choices included portraits of personalities he admires, such as artist Laurie Anderson and musician David Byrne. In harmony with the purity of Mapplethorpe’s work, Simons integrated the photographs in simple silhouettes, focussing considerable attention onto how the images were framed. The labels in the garments also bear witness to a shared artistic signature: Raf Simons // Robert Mapplethorpe.

In his 2013 Spring-Summer collection, Simons integrated a number of portraits of the artist Brian Calvin. For the designer, in combination with short shorts, they evoke the relaxed atmosphere of Los Angeles, the home of the painter.

I am interested in creative collaboration, because dialogue is the best way to evolve. Collaboration is challenging, but in a good way. It can pull you out of your own comfort zone and lead you to something new.

The Leap to Women’s Fashion

The work of the French ceramicist Pol Chambost was the inspiration for sculptural curves, modelled volumes and surprising touches of colour.

After ten years of designing menswear, as creative director for Jil Sander, Simons added women’s fashion to his repertoire in 2005. While remaining faithful to the minimalist aesthetic of its founder, he infused the brand with new energy in the form of streamlined silhouettes and references to visual art and music.

Simons’ first collection for Dior for Autumn-Winter of 2012 was followed by the ready-to-wear Spring-Summer collection for 2013, in which he streamlined the late Christian Dior’s world-famous ‘Bar’ hourglass silhouette in black tuxedos and short-skirted formal suits. He closed out the show with a number of ensembles with close-fitting, short bodices in fine knits and voluminous skirts in silk with printed floral motifs, finished with a layer of iridescent organza.

In 2012, Simons became creative director for Dior. He modernized the codes of the French couture house by highlighting Christian Dior's iconic legacy and innovating with bold use of materials and colours. 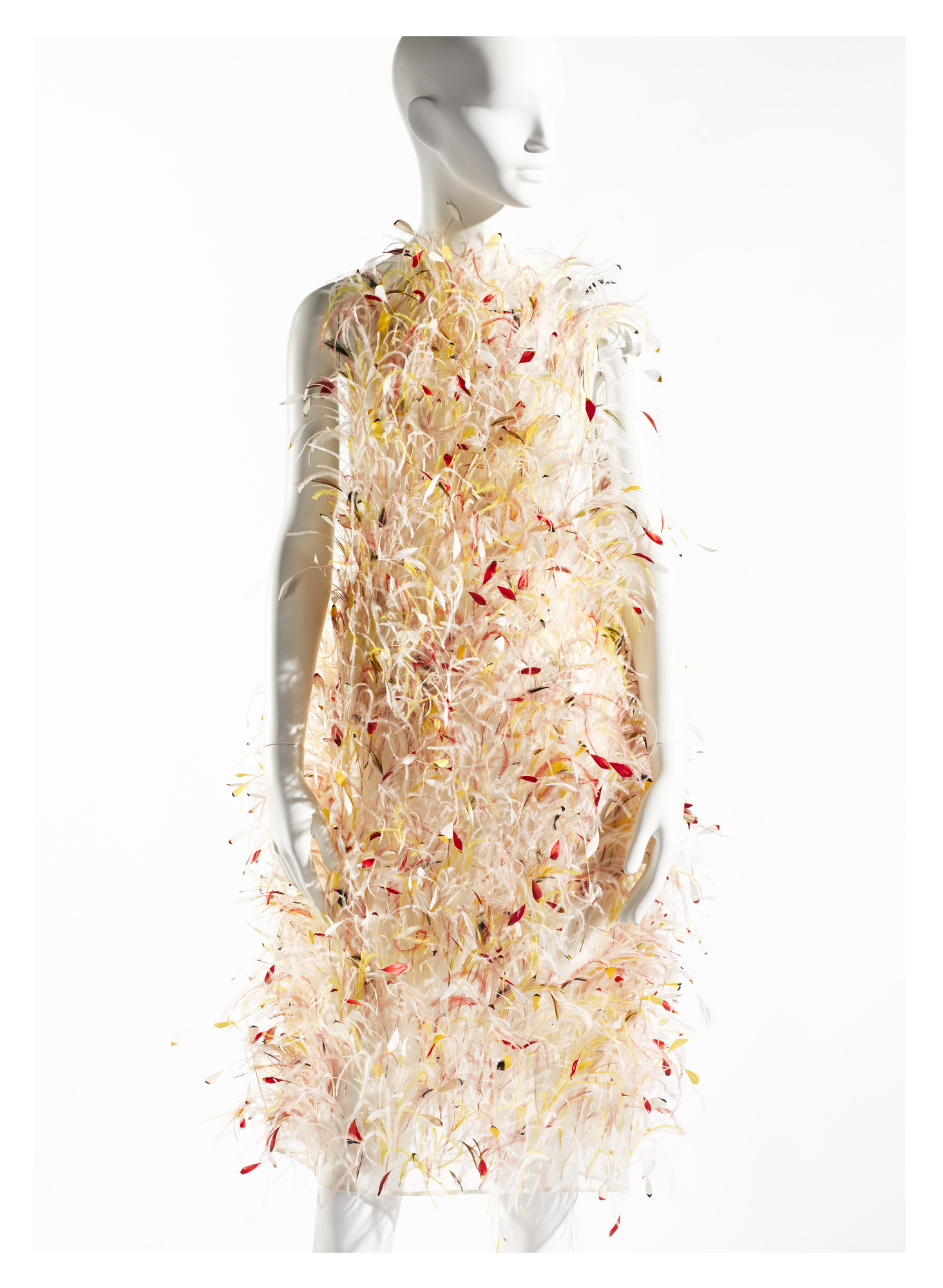 This dress in organza, decorated with polychrome hand-painted feathers, was one of the first of Raf Simons’ creations for the American label, Calvin Klein. The Belgian designer was appointed creative director in August of 2016, and the following January, he launched the Calvin Klein by Appointment line, with designs made to measure. Actress Julianne Moore wore the dress for the Costume Institute Benefit at the Metropolitan Museum of Art in New York. A reworked version of the dress appeared in the Autumn-Winter collection of 2017-18, which highlighted references to Americana, with sheriff’s jackets and brightly-coloured marching band uniforms. A year later, Simons explored safety and protection, incorporating fire-fighting gear, knitted balaclavas and Mylar survival blankets transformed into dresses, finished with lace.