MoMu spoke with Dries Otten, the interior architect behind the revamped MoMu Studio

Not only the museum was given a facelift – the space for the children's and adults' workshops was also thoroughly overhauled. Interior architect Dries Otten successfully set to work on the challenging space of the MoMu Studio. We asked him about his approach.

What was the biggest challenge in designing the Studio?

“The room where the Studio is located was initially not the nicest space. It felt like a residual space, with difficult proportions: a very horizontal volume with a low ceiling. A central sagging beam reinforces that feeling. The client asked for flexible use and as much storage space as possible. An unattractive niche with two sinks presented an additional challenge. To make it cosier and more homely, we had to look for some better proportions. That was actually the most work we had in this assignment. We chose to put three red volumes in place. Two of them are cabinets, while the third is a ‘fake volume’ that provides access to the elevator. Instead of sliding the cabinets classically against the wall, we used them to divide up the space. This creates two smaller rooms and one larger one, while maintaining the spaciousness and continuity of the space. We hid the infamous alcove behind a green sliding door. This created a natural separation between the different areas, each with its own function without making that explicit.”

“The list of requirements was very extensive. That's why we put a lot of things away. For example, the photo studio is behind a blue and white striped curtain. The tables were given wheels and are as high as the cabinet with photo materials. This way, you can turn it into a photo studio without much effort. We also provided metal strips in a stripe pattern, as an alternative pin board to hang creations on and create an optical effect. We also detached the benches from the windows to let as much light through as possible. That's coming through under the benches now. I imagined a group of school-age children storming into the room and throwing their book bags under the benches. That way, the whole thing still stays organised.”

Child-friendly doesn't necessarily mean childish. I always try to maintain a certain freshness – in most projects, there's a twist.

The Studio is used by both children and adults – did that influence the design?

“We didn't really take that into account in the design. Children are often underestimated – they can handle more than you think. Child-friendly doesn't necessarily mean childish. I always try to maintain a certain freshness. I refuse to take an interior too seriously. In most projects, there's a twist.”

Can you say anything about the use of colour?

“Choosing colours is very intuitive to us. I do have a bit of a thing for blue and white curtains – they often appear in my designs. The MoMu's specimens are, of course, tailor-made and fireproof. But the blue and white stripes have something nostalgic – they evoke the image of windbreaks by the sea and the summer. They make me cheerful. Another cheerful element is the large yellow sun that masks the ventilation grid. We use a lot of elementary shapes and colours anyway. It's purely a coincidence that it's now in a place where children will be too. The fact that we often fall back on blue, white and red doesn't mean much either. These are colours that stand out and it just looks fresh.”

The interior of the Studio is sustainable in two ways: it can be restored and adapted to the times.

Did you take sustainability into account, and if so, how?

“Sustainability is mainly in the architecture of a building – the interior design is only the last layer. But we do look for soundness in materials and shapes and take into account a number of practical issues, such as maintenance. A plank remains a plank, of course – it can always be damaged. This is related to designs for a (semi) public space. The laminate of the tables, for example, can take a beating, but an angry teenager will definitely break it. We often work with painted wood. This is easy to maintain and can easily be given a new coat. Not just if it's damaged. The coral red is very present in the Studio. If it goes totally out of style in 10 years, you can just put a different colour on it. It's sustainable in two ways: it can be restored and adapted to the times.”

Interior architecture is about more than just choosing colours and curtains – it's a work of craftsmanship. We were able to show that here, by redefining the space with a space-enhancing design.

What are you most proud of in this achievement?

“The idea of dividing up the space using the cabinets ended up creating greater spaciousness. There was a need for a photo studio, but also for seating for twenty people and storage space for the many craft materials. In addition, we had to take flexibility into account. The space had to be suitable for briefing guides, receiving visitors and holding workshops. We found solutions to that, such as the stackable chairs and the big table that actually consists of three small ones. We are very satisfied with our design. Interior architecture is easily pushed into a lifestyle corner. Usually, people only see the end result in photos. No-one gets to see the original space and its challenges. But our field is about more than just choosing colours and curtains – it's a work of craftsmanship. I get the feeling that we were able to show that here, by redefining the space provided with a space-enhancing design.” 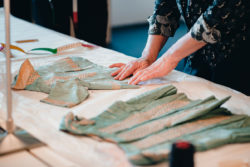