In the 16th century, fine white linens were a precious and important part of traditional European dress and household textiles. Considerable attention was consequently paid to their finishing and maintenance – a women’s concern. Cuffs were decorated with embroidery, damaged sections carefully darned, and linens were sent to a bleachfield several times a year, where they were washed and laid out in the sun to bleach. To ensure they did not get lost, more and more people began marking the fabrics, embroidering their initials on them – sometimes adding a year and a number indicating how many pieces of a given item they owned. Decorating, repairing and marking these items was of course not done haphazardly or without knowledge and skill. Embroideries were completed according to existing models and prior to the introduction of printed pattern books, embroiderers used fabric samplers on which to practice existing and new motifs. The Dutch word merken, meaning 'to mark', gave its name to these samplers or merklappen.

Although very few samplers from before the 17th century have survived, The Holy Family, painted in 1520 by Joos van Cleve, illustrates that they were found in our region during previous centuries. In the foreground of the painting, we see three spools of thread and a folded sampler with embroidered fauna and flora, but no alphabets or numbers. It was during this period that the first printed pattern books for weaving and embroidery appeared, including decorative motifs and alphabets in Gothic and Roman script. Nevertheless, samplers with embroidered motifs and alphabets remained a common embroiderer’s tool, in part because printed materials were very expensive. An example is this 17th-century sampler from the MoMu collection.

SAMPLER WITH WHITE EMBROIDERY AND RETICELLA

This sampler, made from linen and completely embroidered in white thread, includes three alphabets in white embroidery, as well as five borders in reticella. This embroidery technique was a forerunner to needlepoint lace and was achieved by removing threads from a weave and reworking the remaining threads with buttonhole stitches to fill in the gaps. You can learn more about early lace techniques and their forerunners in the past exhibition P.LACE.S - Looking through Antwerp Lace. 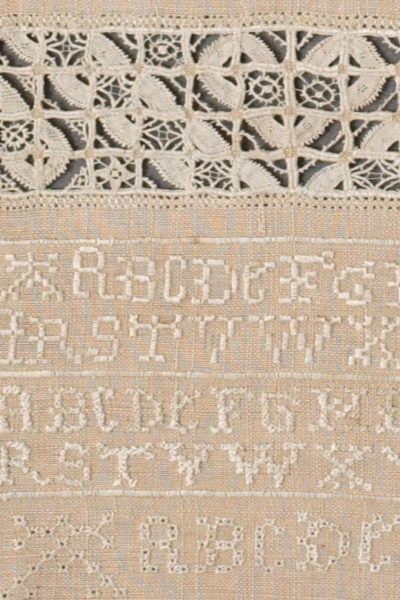 For a long time, the most important purpose of education for girls was to prepare them for running a household. In addition to reading, writing and arithmetic, learning to use needle and thread was an essential part of their education. Over the course of history, samplers were introduced as practice pieces. They were physical witnesses to the learning process of a range of skills: not only fine handwork, but also thread counting and reading and writing letters and numbers. Embroidered letters were arranged alphabetically or in increasing degree of difficulty. In addition to embroidery and the marking of household linens, girls also learned other skills, including crocheting, knitting, sewing and darning damaged fabrics. This gave rise to several subcategories of samplers, such as the knitting sampler, crochet sampler, needlework sampler and darning sampler. 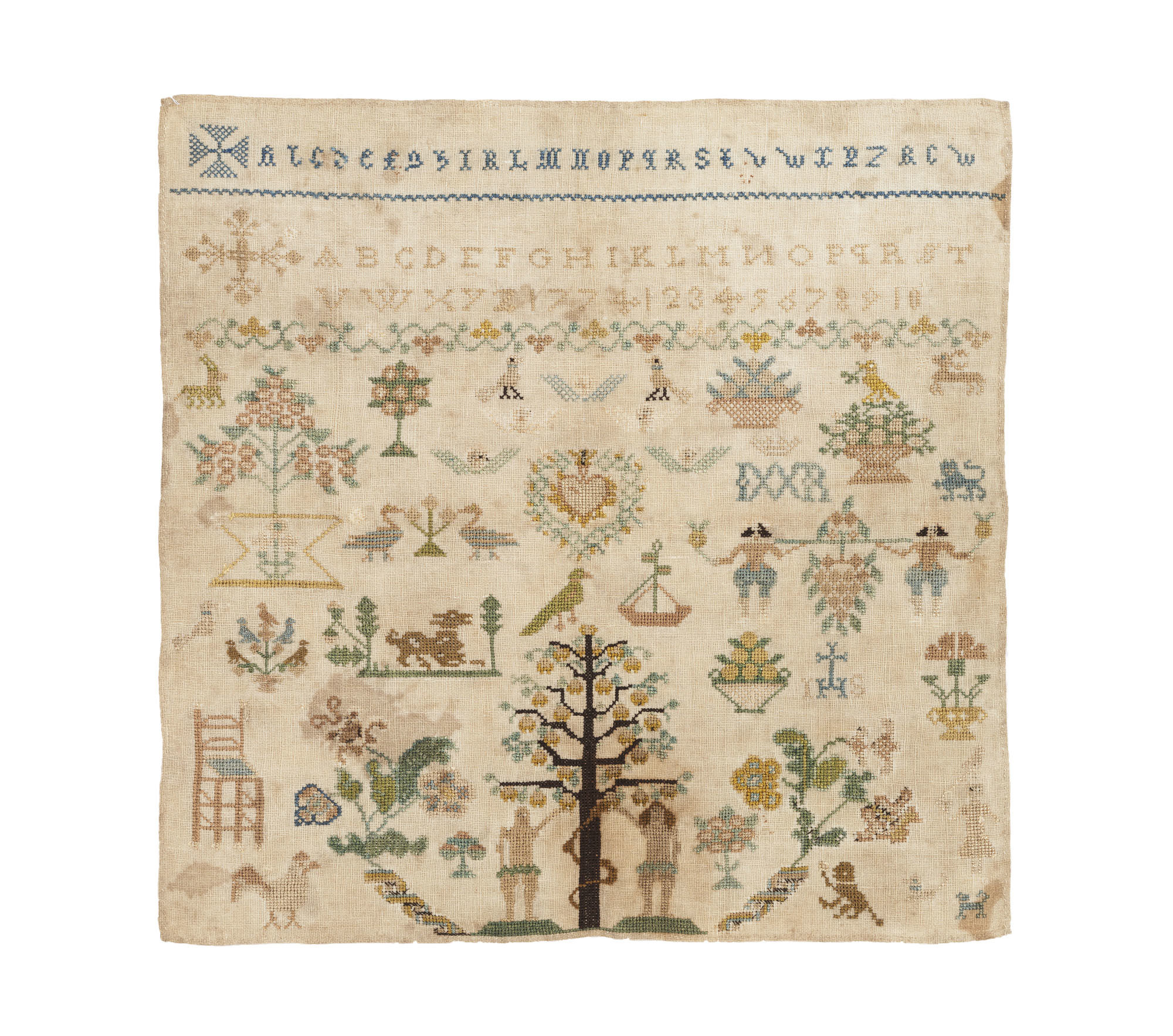 Many of the motifs on samplers drew inspiration from the animal and plant kingdoms, as well as domestic life. Biblical themes were also common. Motifs were often selected for their symbolic meaning. They might refer to an abstract idea, a certain virtue, or serve as a warning. Birds could symbolize new life, carnations love, monkeys frivolity, while scenes such as the Fall of Man warned against disobedience and were reminders of original sin. Some popular worldly motifs, including roses, carnations, fruit and fruit baskets, swans and doves, as well as religious motifs such as Adam and Eve, Joshua and Caleb, the Christ monogram, the Sacred Heart of Christ, and the Mary monogram can be seen on this sampler.

In 1552, the Maagdenhuis (Maidens’ House) was opened in Antwerp. Until 1882, orphan girls lived in this charitable institution from around the age of ten until their early twenties. Here, they learned to read, write and do arithmetic, but they primarily learned to complete household tasks and needlework. On the one hand, the work they produced was sold to help finance the institution, while on the other, the girls received an education that would prepare them to provide for themselves in the future – as maids or seamstresses. Two 19th-century examples show that producing samplers was part of the needlework education at the Maagdenhuis.

These samplers are not so much an exercise in marking linens with initials and numbers, as in darning damaged fabrics: they are darning samplers. The first was made in 1864 by Louise Joséphine Van Opstal, who was taken in at the Maagdenhuis after the death of both her parents. At the top, she embroidered her initials, surrounded with a floral wreath and flanked by baskets of flowers and birds. In large cross-stitch letters, she formed the words Don D'amitié à François Van Opstal, dedicating the sampler to her brother, who was now in the Knechtjeshuis orphanage for boys. In 1866, together with Rosalie Caroline Baele, Louise made another sampler, again dedicated to her brother François. Louise left the Maagdenhuis at the age of 20. Thanks to her education, she was able to enter the service of Jonkvrouw Emilie Ullens.

In the past, at times when textiles were costly and needed to last as long as possible, darning was an important skill. During the 19th century, although industrialized textile production had made clothing and household textiles less expensive, exercises in darning continued to be part of needlework education. There are two types of darning, with different levels of difficulty.

In this form of darning, threads are counted and various weaves – plain, twill, herringbone and satin – are imitated by rows of stitches on the fabric of the sampler. This variation of darning can also be seen on the samplers made by Louise Van Opstal.

A more difficult variation of darning involved cutting out a section of the fabric and subsequently filling in the hole. Once again, the threads were counted in order to mimic various weaves. This technique resulted in characteristic cross-shaped darning.

As early as the latter half of the 14th century, convents were providing basic education for girls. Girls from different social backgrounds received an education in these convents, but less well-off students were not boarders – this was reserved for the upper classes. The French Revolution had a great impact on schools like these, as convents were forced to close down. After 1815, what is today Belgium came under Dutch rule, and religious brothers and sisters were able to return to their cloisters. They established numerous boarding schools for girls, where fine handicrafts formed an important part of their education, right up through the mid-20th century. We can see the work of these students in a number of samplers in the MoMu collection.

An interesting example is the French-speaking Ursuline Boarding School in Gierle. In 1860, the nuns set up a village school for local girls, where they taught them French and sewing, among other things. In 1873, after a few successful years, the sisters transformed the school into a boarding school where well-to-do pupils from all over Europe were educated. In addition to general academic subjects, the girls were taught music, drawing and sewing. While she was a student there, Angèle Rongé made several samplers, including a needlework sampler and a so-called souvenir de ma jeunesse, now in the MoMu collection.

The needlework sampler is a subcategory used to practice a broad range of sewing techniques, from making buttonholes, inserting whalebone, cutting and finishing seams, up to and including making waistbands, fringing and pleating. While this type of sampler focuses less on ornament and more on useful dressmaking techniques, some needlework samplers are visually appealing because of their geometric composition of neat sewing exercises. Buttonholes, hooks, eyelets, and various embroidery stiches are combined in an aesthetic arrangement. Certain needlework samplers even contain miniature clothing such as a hat, a cuff, a trouser leg, or a shirt panel. These allowed the maker to practice dressmaking techniques at scale. 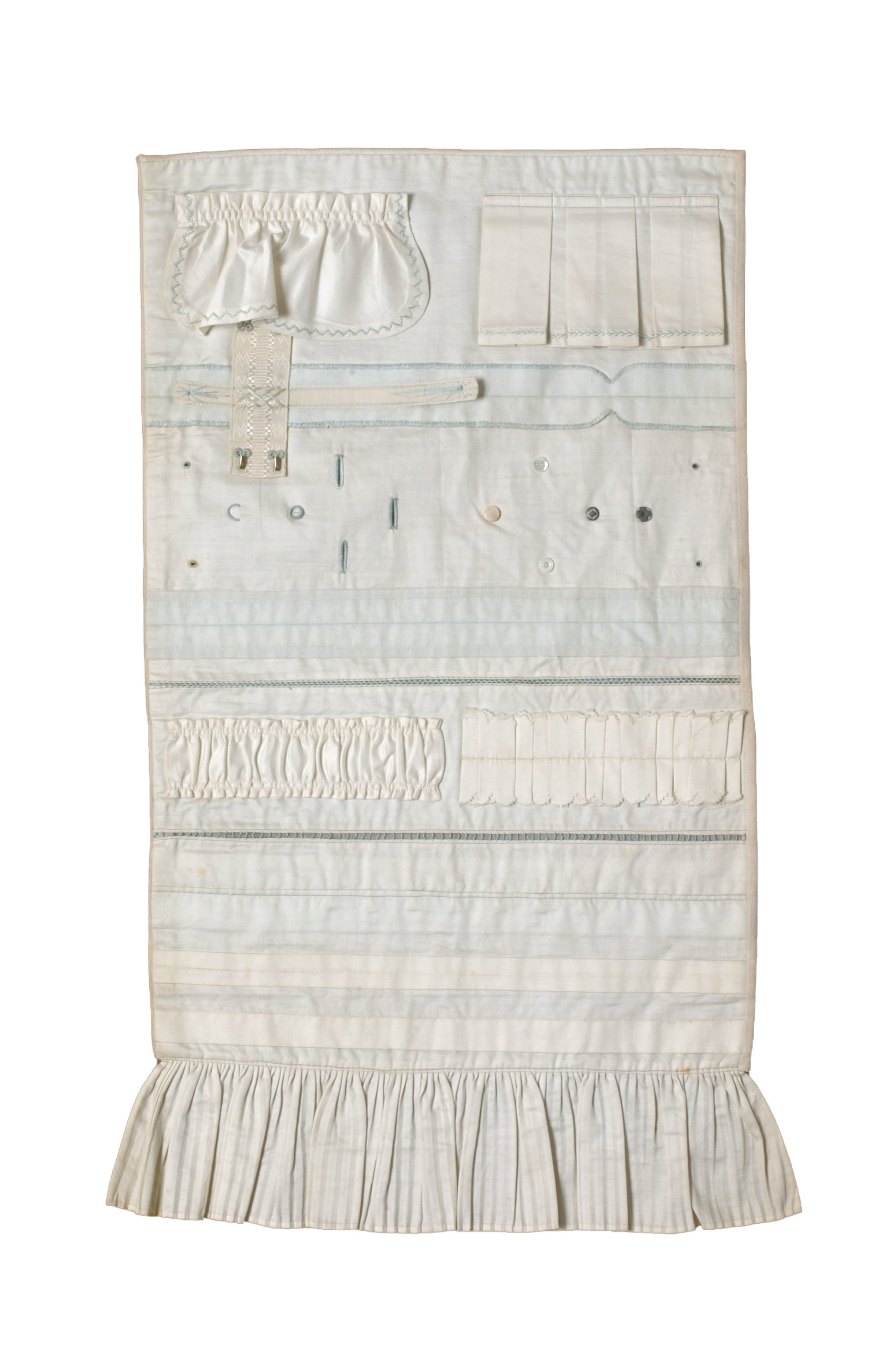 From the late 19th century, so-called lange lappen or pronklappen were also produced in girls’ boarding schools. Sometimes metres in length, they were composed of all kinds of crochet, knitting, sewing and embroidery exercises, often created over several years. These were sewn together and lined with colourful cotton or cotton satin. When the girls graduated, these scrolls served as proof of the maker’s skills – which gave them the Dutch name of pronklap, the verb pronken meaning ‘to boast’. These scrolls were also referred to as souvenir de ma jeunesse, emphasizing that the young lady should look back on her school years with pleasure.

Miniature articles of clothing and handicraft exercises were not just brought together in the form of samplers, but in some schools students collected them in an album d’ouvrage. You can read more about these practice albums, as well as additional sewing course materials, in our Collection Story on dressmaking course materials.

Photograph at the top of the page: MoMu collectie inv. nr. T3322