MoMu will reopen during the weekend of 4 and 5 September 2021. Exciting times, not least for the team from B-architecten, the renowned Belgian architectural firm that was responsible for the renovation.

We’ve made the building visible again and we're delighted to be able to give it back to fashion.

Why did this assignment appeal to you?

Dirk Engelen (architect, co-founder of B-architecten): "B-architecten have been active for a little over twenty years now and, in that period, we've realised a lot of projects within the cultural sector: from scenographies and theatre buildings to libraries. From the very beginning, we have maintained close contact with the fashion world, allowing us to develop stores for Walter Van Beirendonck, Veronique Branquinho, Missoni and Stephan Schneider, to name but a few.

So when the competition to renovate the MoMu building was held, we grabbed our chance right away. I do remember that, in our initial presentation, we strongly indicated that we wanted to look at the work of Marie-José Van Hee, as the museum's first architect, with great respect and to continue working synergistically with her vision.

What choices did you make and how did you put the B-architecten stamp on the renovation?

Kim Vanthienen (engineer-architect and project leader at B-architecten): "So our proposal didn't include substantial changes to the building – we opted for acupunctural interventions, to optimise the building in certain areas."

Dirk Engelen: "We have reintroduced the original plans, because buildings often get dirty over time. I attended the opening of MoMu at the time: at first, the ground floor was a gigantic open and clean space. Over the years, that concept has become somewhat blurred by all kinds of interventions. For us, the central hall had to become a nice spacious lobby again, and we built a new patio. What we demolished, we rebuilt in line with the same kind of philosophy and sense of space as Marie-José Van Hee, but with even more room for the arts. We also absolutely wanted to reactivate the MoMu façades and make MoMu visible again from all sides. An important question from the competition was to redesign the entrance of the building and to find a solution for the deep outer tunnel that was perceived as negative.

We then designed a new façade parallel to the entrance to Copyright Bookshop with a large revolving door, clear signage with the MoMu logo on the façade and a fully illuminated glass ceiling. This way, the museum finally is truly on the street side and you don't have to go through a dark shaft first. Where there used to be a 'Renaissance' clothing shop, there will be a second entrance, which will take you into the lobby and the café/restaurant.

The priority for the renovation is that fashion lovers will be able to visit the museum all year round from its reopening.

Kim Vanthienen: "The exhibition spaces are actually conceived as a 'black box'. The technical and building physics measures required are taken into account, but we ensure that flexibility is maintained, for example through the use of shutters incorporated into the façades. These ensure that light can be provided if required."

The spaces have indeed been designed to be much brighter and calmer, so that it will hopefully be easier to place new exhibits in different settings each time. A number of other spaces in the building will take advantage of this flexibility as well. An auditorium was also designed to bring some more educational aspects to the fore and the anti-chamber of the large exhibition space can be used for a more communal project.

The library, where, among other things, a beautiful study collection can be consulted, will become much more accessible. The offices of the MoMu-staff were optimised. How did you approach that?

Dirk Engelen: "The offices have indeed been given a total makeover. We provided more workstations at the windows, flexible meeting places and a welcoming entrance desk at the front of the library."

Dirk Engelen: "There used to be some archive and depot space on that floor too, but that was completely inadequate. So we've built a complete extra floor, including studio and preparation rooms. And from now on, MoMu will also have an in-house photo studio, but everything I just mentioned is not accessible to the public."

There's more than enough to look forward to! Last question: what is your favourite MoMu exhibition?

We found the exhibition of Bernhard Willhelm 2007 very strong – the entire building was taken up by 1 total artwork. 'Maison Martin Margiela – 20' in 2008, because you really felt Martin's world. 'Moi, Veronique Branquinho', was special to us because we got to know MoMu up close by realising the scenography for this exhibition. 'Walter Van Beirendonck - Dream the World Awake' in 2011 was impressive – what one man can achieve, and still is! The 'Happy Birthday Dear Academy' exhibition was also very strong, with satellite exhibitions at the MAS. 'Game Changers: Reinventing the 20th Century Silhouette', the technical development of the materials and the sculptural aesthetics were impressive. We're already looking forward to seeing how the 3 exhibition spaces will be used after the renovation!

4 Ways To Conduct Your Fashion Research At Home 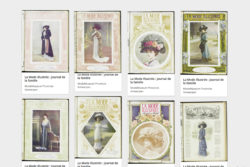