And the MoMu Award goes to...

Every year MoMu awards an aspiring graduate from the fashion academy. This year the award went to Quinten Mestdagh with his women’s collection ‘Default by bliss’. MoMu was intrigued by the young designer’s unique graphic style and the execution of his storytelling. Quinten looks for techniques and aesthetics – for example mother-of-pearl buttons and black and white pixels – that have nothing to do with each other but do have a visual connexion. He then uses the contrast and similarity in technique and aesthetic and merges them together to conceive a new outcome. Quinten's’ master collection is a research of different kinds of aesthetic and visual languages used in fashion or within cultural identities – the way people express themselves by using graphics and decoration on garments.

What was your initial approach to creating your collection?

When I started this year, I did a lot of research on materials and techniques used in a fashion context, and different aesthetics. An important departure point for my collection were the mother-of-pearl buttons, which come from the Pearly Kings and Queens of London. They are a working-class group in the UK and every year they parade in the streets in their hand-embroidered jackets with these mother-of-pearl buttons.

What captivated me the most, was the fact that the clothes were always with a black background and white dots on top. The aesthetic reminded me of graphic bitmaps. I liked the idea of something that was only used in one context and translating it into another situation. In this case a more calculated and graphic environment. At the same time, I created a different feeling.

You also use a combination of rhinestones and the mediaeval era. Where did that idea come from?

I’ve been looking at t-shirts created with the hot-fix rhinestone technique, it is usually only used in a trashy context - you see them in pictures of pop stars and so on. It’s quite a modern technique, invented in the late eighties or so. I decided to contrast it with a mediaeval, ornamental aesthetic. Who would be the Marilyn Monroe 500 years ago? I found a portrait of Petrus Christus and chose it so I could play with the idea of a very modern technique but in a historical context. If they would have made t-shirts back then, she would have been on them.

You’ve also been working with some other ideas as well, isn’t it?

True, another outset for my inspiration is about Western and Americana aesthetics. It’s an overused theme in collections; I’ve tried to figure out how to translate this aesthetics into something graphic. A third idea of mine was the overdecoration – the way people use decoration to show wealth. Luxury brands use monograms to define their brand. And what are those monograms? They’re tiny symbols combined together. Handbags for instance became a status symbol and the function of the handbag is almost gone, it loses its identity.

An interesting thing about the monogram is, that luxury brands don’t want to get rid of it. Handbags carrying the monogram of a brand became bestsellers. It doesn’t matter anymore if it’s fake or not, because the visual aesthetics are almost the same.

Have you noticed how you create moiré’s when, for example, you overlay bitmaps patterns? In that process, other patterns spontaneously start to grow, which could also be interesting?

Yes, but the thing is that I had to stop myself after a while because you can go so far that everything starts to look very different from everything else, and I wanted there to be an overall connexion. If I went even further, I don’t think it would work visually. I didn’t want to lose myself in too much detail, but really have the purest, strongest visual connexion. Also, an approach that came later is that I took all these various techniques and placed them in different contexts. Hence, an idea was created that the used technique was damaged, or some sort of error had occurred in the process.

During the renovations, MoMu hopes to inspire at other locations. Discover the photoshoot on display in the AMS (Antwerp Management School) building at Boogkeers 5 from 31 October 2019 until 7 February 2020.

THIS TEXT IS BASED ON EXCERPTS FROM “QUINTEN MESTDAGH: DEFAULT BY BLISS – WHO WOULD BE THE MARILYN MONROE OF 500 YEARS AGO?” PUBLISHED IN “MASTER 2019”.

Kindred Spirits: The radical poetry of Japanese and Belgian designers 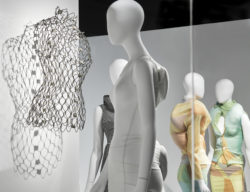