After a tumultuous year and a hectic campaign, on January 20th 2021, Joe Biden officially became the 46th president of the United States of America, and Kamala Harris, his Vice President. Together they climbed the stairs of the U.S. Capitol, and the important symbolism of their outfits stood out within the formality of the ceremony. But how are we to understood the purple coat of Kamala Harris and the ubiquitous shades of blue? This event is an opportunity to develop on the idea that sartorial choices of politicians may act as unspoken political messages.

The proleptic color scheme of the Inauguration Day 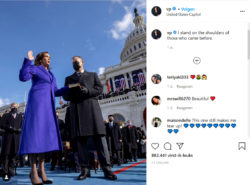 On the steps of the Capitol, Kamala Harris wore a bright purple coat designed by Christopher John Rogers, a POC designer, and the first lady Jill Biden wore an all-blue tweed coat with a velvet collar. This last piece was created by Alexandra O’Neill who developed the label Markarian, whose made-to-order pieces contribute to challenge waste within fashion industry. If we look beyond the surface of the garments, we can assume the color purple (which is the combination of the colours red and blue) appears to stand for the wish of a united nation emancipated from the political division between the two main national parties; the Democrats and the Republicans. Whilst all shades of blue dominated the stage, we can ponder if such choices were made to offer the image of a serene and stable society to be restored over these coming four years. Also, the selection of these fashion designers seem to reflect some of the political tendencies of the new government, as they promote the national economy, an inclusive society, and addressing ecological issues.

The legacy of suffragettes and their white dresses

In the beginning of the 20th century, organisations of women fought actively to defend their right to vote, and held protests in the streets to speak out for change. To claim their place in the political sphere, the so-called Suffragettes opted for the conscious strategy to conform to contemporary standards and ideals of fashion and femininity, and better displayed their provocative boldness within their speeches and acts. Long white dresses were to be worn during public protests. Their brightness would stand out on black and white photographs, and they were democratised items, that enabled any woman to join the march regardless of her social status. Furthermore, to gain traction they wore a trio of colors, each of which implied a direct sense of symbolism. Purple represented the loyalty they had for their movement, whilst white stood for purity. Green or gold often accompanied the former two as emblems of hope. These outstanding colours were set on many items, such as sashes, brooches and hats. Not only marking the belonging to a political movement, these items silently claimed shared values and solidarity to all women.

The white dresses of the Suffragettes were often referred to throughout political history. In 1968, Shirley Chisholm dressed in white as she became the first Black woman elected for the American Congress. In 2019, at the State of the Union address, Democratic women all wore white to pay tribute to their predecessors. We can further wonder whether Kamala Harris’ purple coat, and the white Carolina Herrera suit she wore at her victory speech are direct references to the Suffragettes’ colour code.

If the numerous tailor-made dresses of Queen Elizabeth II constitute a rich and precious collection of fashion items, they chiefly are witnesses of the United Kingdom’s political positioning. In her younger days she was the representative figure of the British diplomacy, and much attention was given to her appearance at official meetings. Her dresses were often fraught with visual signifiers which speak for the Empire’s interests. For example, they would be adorned with the national symbols or colours of the visited country. At a crucial moment of discussion over the destiny of British relationships with Hong Kong, Queen Elizabeth II wore a dress decorated with embroideries of the Chinese national flower, to meet the politician Deng Xiaoping. No words would be spoken on the respect and good intentions she meant towards China; as it was all induced through visual symbols.

In the morning of November 22nd,1963, John F. Kennedy and his wife Jacqueline landed in Dallas for an official visit. The sun shone bright, and as Jackie was smiling to the camera, she was holding flowers in her arms. She was wearing a pink Chanel suit with a matching pillbox hat, of which line-for-line couture copies were bought from Chez Ninon in New-York City.

They were driving through the city when two bullets hit Kennedy’s head, and he collapsed on the backseat. Clinging to her husband till they had reached the hospital, Jackie was smeared with the blood of Kennedy’s skull over her skirt suit. Half an hour later, they declared the president dead.

Till the next morning Jackie refused to take off her suit. While the president’s assassination preoccupied every national and international media, her dismayed expression and the stains on the suit, formed a strong image to be photographed and spread. As Jackie said herself (surely conscious of her exposure) “it is for them to see what they have done to Jack”. Coincidentally, the cheerful hue of the suit highlighted a sharp contrast between the celebration of the morning and the following global state of mourning. In itself this became a symbol of a grief-stricken nation and its political family. Both its colour and pattern combined could never be dissociated from their historical connotations as they stamped a tragic memory on American history.

As decades and centuries unravel, colours bear more and more connotations and offer a wide palette of meaning. They are like metaphors whose senses are left to interpretation but trigger associations at least. Displaced on clothing, colours are a powerful tool to infuse subtext in politicians’ public appearances, and are to be read according to cultural and historical contexts and sets of references. As presented, if women often embraced those significances to convey their opinion through their look, it is not gender specific and many other examples could be added to the list. It simply appears that politicised women are able to make use of fashion, to substitute words they cannot say, by playing with the visual platform they are given.

The Story Behind The Garment: FW1993-94 'Artisanal' dress by Maison Martin Margiela